Dirty Clubs is a card game that is similar to Euchre and very popular in the Midwest. Between three and six players take turns lying down cards that follow suit. The person with the highest card takes the pile or “trick.” Subtract points from your score based on the number of tricks you take. The first player to reach zero points wins the game. Read on to learn how to play Dirty Clubs.

Rules
Use the 10, J, Q, K and A of each suit for three players. For more than three players, use the 9, 8, and 7. Pick someone to be the dealer for the first hand and then it passes to the left each subsequent hand.

Deal five cards to each player, and put the remaining cards face down with the top card face up. If the top card is a club, this is called Dirty Clubs and clubs are automatically trump, with no bidding.

Choose a suit to be the trump for each hand. Trump cards are ranked higher than the other suits. The J of the trump suit is called the right bauer, and then J of the non-trump suit of the same color is the left bauer. Those two cards will take tricks before any of the other cards. The other suits rank from high to low as follows: A-K-Q-J-10-9-8-7.

Bid on trump by starting with the player to the left of the dealer, and continuing in a clockwise direction. Each player bids on how many tricks they think they can take. The player with the highest bid chooses trump.

Decide if you want to stay in the round once trump is determined. If you drop out, you cannot take any tricks or subtract points. You cannot drop out in a Dirty Clubs hand.

Start with the player to the left of the dealer and move clockwise. The first player chooses a card from her hand and lays it face up. Each player must follow suit if they have it; otherwise, they can play another suit or trump.

Win the trick if you played the highest trump card. If there’s no trump, the highest card of the suit led wins. Pick up the pile and place it next to you. Then pick a card from your hand to lead the next trick.

Score the game by starting with the same number of points for each player, typically 15. The goal is to get to zero points. If two or more players get to zero in the same hand, then the winner is the one farthest past zero.

A variation on scoring is to add five points to anyone’s score who stays in but doesn’t take any tricks in the hand. 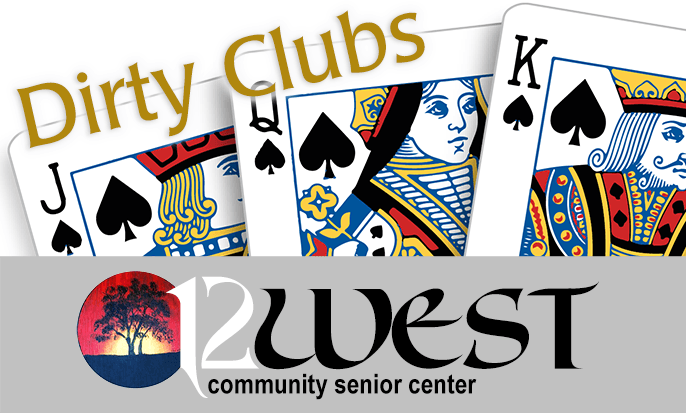 There are no upcoming events.
Page load link
Go to Top